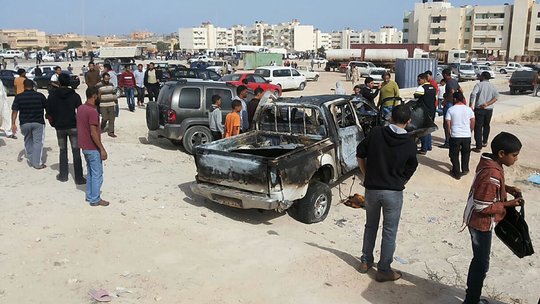 My two articles focus on the Libyan conflict and its escalation into a regional war by proxy. According to VICE news US officials have directed accusations towards Egypt and the UAE for conducting air strikes on Islamist militias in Libya in secrecy without consulting the international community and subsequently denying all allegations. Analysts fear that Libya has become an “arena for a battle between regional rivals.” UAE and Egypt are backing General Haftar’s Operation Dignity and other countries such as Qatar and Turkey are funding the Islamist Operation Dawn. My second article from New York Times accentuates the confirmation that the Libyan conflict has turned into a regional struggle with evidence of car bombings outside the UAE and Egyptian embassies. These bombings by Islamist militants are an obvious backlash against the two major countries aiding their opponents.

This interference from regional actors may be beneficial to militants fighting against an Islamic state, however it has completely exacerbated Libya’s degradation ultimately undermining any chance the country has at a democratic transition or even simpler, a peaceful resolution. I think fact that this civil war has become a religious war is the component that makes it so controversial. If it was just domestic in-fighting due to the lack of a stable government and institutional structure, regional actors wouldn’t really feel compelled to intervene. But given the current atmosphere of the region as a whole and the ISIL insurgency, actors across the Middle East are doing their part to contain the fire.